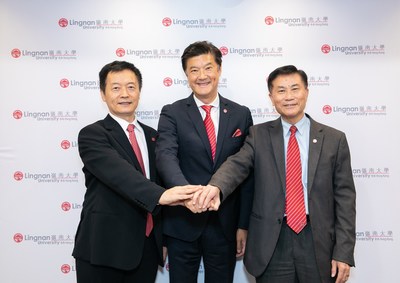 HONG KONG, Oct. 17, 2022 /PRNewswire/ -- The Council of Lingnan University (LU) in Hong Kong approved today (17 October) the recommendation of its Search Committee to appoint Prof S Joe Qin, who is a world-leading data science expert, as the next President for a period of five years.

The Council Chairman of LU, Mr Andrew Yao Cho-fai congratulated Prof Qin on his new appointment. "Prof Qin is a proven leader in higher education and an accomplished scholar with global recognition. Prof Qin also has rich knowledge of education systems of Mainland, the US and Hong Kong and is an active leading researcher in his field. The Council considers him to be a suitable president to lead the University forward," he said.

President Prof Leonard K Cheng said, "I congratulate Prof Qin on his appointment as President of LU and wish him all the best in his new role. With his rich experiences in higher education and profound expertise in data science and related fields, I truly believe that he will take LU to new heights."

Professor Qin said, "LU stands out in its whole-person education system, its glorious long history of higher education, and determination to excel in the digital era. I am very fortunate and proud to be selected as its next President to carry forward the traditions and ascend to excellence on the world's higher education stage together with all Lingnanians."

Prof Qin received his Bachelor (1984) and Master degrees (1987) in Automation and Automatic Control from Tsinghua University, and his Doctor of Philosophy (PhD) (1992) in Chemical Engineering from University of Maryland at College Park.

Currently he serves as Dean and Chair Professor of Data Science, the School of Data Science and Director of Hong Kong Institute for Data Science at the City University of Hong Kong. Specialising in data analytics, machine learning, and model predictive control, Prof Qin has been elected to the rank of Fellow of the National Academy of Inventors (NAI) in 2020. He is also Fellow of the American Institute of Chemical Engineers (AIChE), the Institute of Electrical and Electronics Engineers (IEEE), and the International Federation of Automatic Control (IFAC). His scholastic excellence has been recognized internationally with awards from IEEE and AIChE, being the only recipient among those who were educated in mainland China.

Prof Qin will succeed Prof Leonard K Cheng who has served as President of the University since 2013 and retires from his position on 31 August 2023.

"I would like to take this opportunity to thank Prof Cheng for his significant contributions to the University over the years. Under his leadership, Lingnan University gained notable international recognition and became a world-leading liberal arts university," said Mr Andrew Yao Cho-fai.

Lingnan University is a liberal arts university in Hong Kong with the longest established tradition among the local institutions of higher education. Our history dates back to 1888, when our forerunner, the Christian College in China, was founded in Guangzhou, and to 1967, when the institution, as Lingnan College, was re-established in Hong Kong. Lingnan became a publicly funded institution in 1991 and was renamed Lingnan University (LU) in 1999.

Our undergraduate, taught postgraduate and research postgraduate programmes, run by the Faculties of Arts, Business, Social Sciences and School of Graduate Studies, enable students to pursue their goals in a rapidly changing social, cultural and economic environment.

LU is a global leader in quality education. It ranks first for "International Faculty", "Inbound Exchange Students" and "Outbound Exchange Students" in QS Asia University Rankings 2021; ranks third for "Quality Education" in THE University Impact Rankings in two consecutive years (2021 and 2022), and ranks top 22% worldwide in "Arts and Humanities" and our Philosophy ranks 3rd in Hong Kong and 16th in Asia in QS World University Rankings by Subject 2022.

LU's research has also got brilliant result. LU got a high rating in The University Grants Committee's Research Assessment Exercise 2020, which more than half of the research outputs submitted by Lingnan are rated as 4-star (World Leading) or 3-star (Internationally Excellent).